After almost 21 years, a lost piece of local Capelle/Kralingen golfing history was recovered, and a mystery solved, when the Trophy was found in the clubhouse on November 10th last year

While on one of her clubhouse clean-ups, which included the Trophy cabinet, Dieneke van Wessem, stumbled upon a bronze statuette and was trying to locate the owner....without success, and inquired of Cees van Oeveren and I whether it belonged to us. Tempted as we were, to claim the rather attractive trophy we disclaimed any knowledge. However we took the opportunity to ask her if she had any idea where the Capelle/Kralingen Trophy was and explained to her what it looked like.
Within a couple of minutes she had returned with the Trophy, which had been hidden behind some books and files in the Bestuurskamer. And so after years of searching,blaming Arie Sommer  (sorry mate) and Wim Verheijden (who was Captain of the Capelle team in the early days), the mystery was solved......Thanks Dieneke.

The match was inaugurated in 1991 when a team from Capelle challenged  "old friends"  from along the road, to a matchplay/team contest.The first encounter was won by Capelle. Kralingen took the next 2 and Capelle regained it in 1994. For various reasons no matches were played between 1995 and 2007 and that is when the Trophy went absent without leave.
The match was reintroduced in 2008 and captured by the Rotterdammers. Poor Arie was subjected to quite some harsh comments when no Trophy could be handed over to the victorious captain Victor Hoefnagel. All the time Arie pleaded innocence, although very few believed him, including me.
Due to busy programmes 2009 and 2010 were not played.

It was then decided to make it a pre -competitie training match between Capelle Senioren 1 and their counterparts at Kralingen. The visitors won the game at Capelle. Arie's team became Senioren 2 and so in 2012 two matches were arranged.Kralingen defeated Arie's boys but the new Capelle Senioren 1 made amends a few weeks later.
Each team would have taken the Trophy home in 2013 and 2014, had there been one, and on 22nd of February at De Haenen, I accepted the newly found Trophy on behalf of Kralingen Senioren 1 from Jan Prins after a very pleasant and competitive game.

All agreed how important it is to create and then maintain traditions and will make sure this enjoyable fixture is carried on to the future generations of Senior team golfers..... thanks to Dieneke a trophy will record the winners each year. 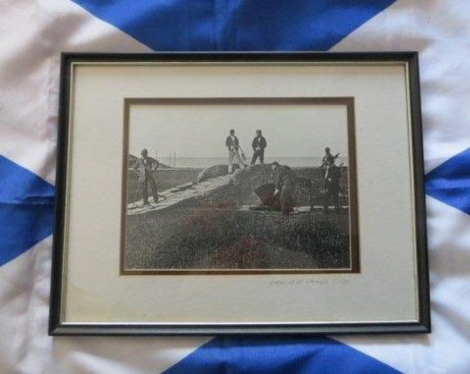